Let's talk about video games for a change.

Last weekend, I had the pleasure of getting to play with Level 5's newest title Guild01.
It's quite a rare beast, a compilation of 4 smaller games in one cartridge, to be published next year for the Nintendo 3DS. The reasoning given by Level5 President Hino Akihiro was that often game creators would have ideas for a game that, while being something they are invested in and are confident that it would be fun, would not actually make financial sense to realize as a full-blown game.

In a time where a lot of games seem to focus on packing as much content into the cart as possible, the idea of shorter, more compact games is most welcome in my eyes.

A few people have asked me about my impressions and a translation of the game's intro trailer, so here we go.
Please note- this is a rough translation, obviously not anything official, and I am not affiliated in any way with the creators of these games. The official translations may well be vastly different. It's a liberal translation that's intended to be easy to read for English speakers, so please, no nitpicking as to the meaning of the Japanese expressions. All names are in their natural order (family name first, except for Yoot Saito and Suda51, who seem to be known to Westerners under these pseudonyms).


1. Intro trailer/ Greetings from the creators

Suda51 (Kaiho Shoujo)
Hello, this is Suda51 of GhM. The conception of Kaiho Shoujo was the result of a talk I had with Hino Akihiro , about creating a new and exciting game based on an original idea.
It's a 3D shoot-em-up, and we're 100% commited and excited about it.
The heroine, Oozora Shouko, pilots a robot and "liberates" Japan, which has been occupied 100 years in the future. In the course of the game, Shouko, who is president of Japan, travels all over the country and liberates it.
It's a very fun and interesting game, and we're excited to have you check it out.

The future.
The gods who had been protecting this beautiful island have been captured, and the country has fallen apart.
(parliament airship Nagata)
Speaker of the House: President, we have a request for external action.
(Against- 207 In favor- 273)
Shouko: Father...
Shouko: Let's go, Kamui!
Speaker of the House: Godspeed, Madam President.
Shouko: Oozora Shouko, 2nd president of New Japan, engaging!

Hi everyone, this is Hirai of [comedian duo] America Zarigani!
Today I have the pleasure of introducing my new project called "Rental Bukiya de Omasse."
In this game, the player controls a weaponsmith who lends out his works.
If you lend someone something, of course you're thinking "Please, bring it back in one piece!", right? A weaponsmith is attached to the arms he has poured his lifeblood into. Of course he wants the adventurer to use them. If at all possible, he wants them to return it to him as well.
"Of course, it's a weapon I forged! Obviously it would be great if the customer would come back as well! That would be fantastic for us all. But, please, bring back my weapon. It's okay if it breaks. But... please just don't lose it."
That's the idea of this game. There's plenty of characters that appear, and there's rich drama to it. You'll find yourself thinking "I'll lend the weapon under these conditions, under those I won't!"
Please try it out for yourself. There's so much to find if you play around with this game, go ahead and try it! I'm begging you!

To everyone here at Tokyo Big Site today. Hello, my name is Yoot Saito.
The title of the game I'm contributing to Level5's Guild01 is called Air Porter.
One of my biggest concerns when developing this game was how to produce it in a short amount of time. "Create a game that people can get addicted to" is a rather challenging task.
I aimed at making a game that people could play without getting too confused. I wanted people to try it out without thinking too much, and get addicted to the gameplay.
I'm confident players will be immediately drawn in. Please try it out.

My name is Matsuno Yasumi, game director at Level5. I am currently working on a game titled Crimson Shroud. It's an adventure game reminiscent of table-talk RPGs, the point-of-origin of RPG games. In a table-talk RPG, a Game Master makes up the story, while players choose between the choices they are presented with, and, from time to time, confront monsters by rolling dice.
Crimson Shroud sums up this gameplay style in a simple and compact way for the 3DS.
The entire staff including me is working hard to deliver this game to you. We're hoping you'll enjoy it.

(5:14 promotional video)
A legendary treasure lost...
It is now no more than a fairy tale — That is what everyone thought.
The "Gift" that brought magic to a world where magic did not exist.
A blessing of the gods — or an invitation from the devil?
Crimson Shroud — the die has been cast.

Now that we got that out of the way...

I had the chance to play the first 3 games in the Guild01 compilation at Level5 World, a convention organized and devoted solely to games by Level5, held at Tokyo Big Site on 10/15-16 2011.

Here's my impressions on each of the games: 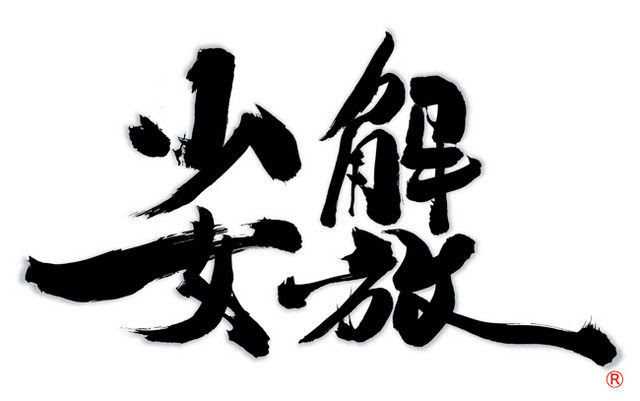 Note: this logo is awesome.

First off, the opening animation (the same as in the trailer above, by animation studio Bones) is gorgeous, and overall the presentation of the entire game was so polished I had no problem imagining it as a stand-alone title.

The player controls a flying Mech (think Gundam or Macross), and is tasked with shooting attacking laser cannons stationed on the ground below, and ultimately destroying three power stations that uphold a protective barrier for the main target.
The Mech hovers rather than jetting around (sometimes it speeds up to cross larger distances), controlled by the 3DS analog stick. You can almost feel the inertia, it was really fun to navigate.
Shots are fired by first marking several (about 10?) targets by sweeping with the touchpen, and then releasing to fire. It enables for gratifying combos, a bit like Child of Eden's main weapon. It's fun as hell.

The verdict: loved it. I love shooters, and this title felt like a full blown product. It's probably limited only in length, and I'd pay for it on its own.

You control hatches that connect several luggage carousels stacked atop each other vertically.
One of the shoulder buttons opens the hatch that leads upwards, the other downwards.
The goal is to single out all suitcases of a certain colour on each carousel, and then load them into the plane, so it can leave on time.
The catch: The hatch opens on all carousels at once, so sometimes you move luggage that you didn't mean to. It's simple as hell, and yet complex and challenging. Sometimes it'll create sudden events like a single piece of suspicious luggage that needs to be singled out and loaded onto a police vehicle.
The trailer also hints on a kind of airplane customizing simulation, and I'm looking forward to see what that does!

The verdict: This feels like a minigame, but has the potential to be an incredible time-eater, just like puzzle games such as Tetris. I spent 15 minutes on the demo and it felt like 2.

This is a quirky title... It takes place entirely inside a weaponsmith's workshop, with a grumpy old smith and his young and enthusiastic apprentice. There were some conversation sequences, involving an oddball adventurer who was looking for a sword to turn him into a superhero. He got a short sword forged with love instead.
The actual forging is a kind of rhythm game, where you have to mimic the beat the blacksmith demonstrates in tune with a melody. Once the sword is finished, you hand it to the adventurer and he heads off, and that's where the demo cut off.
The previews in Famitsu hint that you will be able to follow the resulting adventures on "Donainatter," a microblogging site that basically translates into "What became of them?"

The verdict: There was a bit too little content to judge. I get the impression much of this game's appeal will rely on the conversation segments, so if you don't agree with Hirai's sense of humor, it might have a hard time convincing you... The rhythm game, as they go, was pretty fun, and of course the idea of forging a sword is awesome in itself.

Unfortunately I was not able to try out Crimson Shroud. As Matsuno mentioned in the promo video, it will be an approximation of Tabletop RPGs such as Dungeons & Dragons. There's dice all over the video and even the logo, so you know they'll feature heavily... And that's pretty much all we know so far. Oh, and the team of Matsuno, Minaba Hideo (art duties) and Sakimoto Hitoshi (music), which in itself is something to get excited about.


By the way, only just announced, fans have already created a petition page on Facebook to bring it to US/European markets: https://www.facebook.com/pages/GUILD-01-Petition-for-International-release/161540050607683?sk=info

As mentioned, I am not affiliated with any of the creators or Lv5, and do not own the pictures or video. If they ask me to take it down, I will. (Please don't sue me)
That's it for today, thanks for reading. Now what will I write about next...
Posted by Unknown at 6:40 AM

Email ThisBlogThis!Share to TwitterShare to FacebookShare to Pinterest
Labels: games