So, in the last post I explained to you what a bow is.
Let's look at how to use one.

The character pictured above might look like a perfectly capable archer to you. To someone who has practiced archery for a while, he looks like someone who has never pulled back a bow before.
Let's take a look at why.

Disclaimer: I will be explaining form using competitive recurve and compound archery as examples. This is the form of archery I am most familiar with, however the underlying principles are the same for any type of bow.
Also, this article will not teach you how to shoot, it is mainly intended to help you understand what correct archery looks like.

This is Brady Ellison, he's ranked no. 1 in the world, has won three out of four world cup stages this year, and taken the overall world cup title two years in a row. So you know, he's good.
He also shoots in a very clean, textbook-friendly style, which is why I chose him as an example.

Let's see what we can establish about his form.


What we call stance in archery is basically the position of the archer's feet, laying the groundwork for the direction of the hips, torso, shoulders, arms. The archer's stance is aligning the entire body, so telling you it is a crucial part of shooting form will not come as a surprise.

The base for an archer's stance is the line from where he/she is standing to the target. In competition, there will be a Shooting Line, which is perpendicular to this direction, and all the archers line up on this line and shoot at the same time. Like so:

See the faint white lines extending to the right of the picture? That's the direction the targets are in. Btw that is yours truly in the foreground, and if you look closely you can actually see my arrow flying)

The archer will be placing his/her feet roughly along the imaginary line to the target, and about at shoulder width apart. This is what we call a neutral stance in archery.
Depending on the archer's style, they may put one foot outside of this line, opening or closing their body to the target. In an open stance (a very common stance for high level shooters), you would see more of the archer's chest when looking at them from the target, and in a closed stance (which is rarer for experienced archers), you would see more of their back.

In the picture at the top, the character is showing an open stance, but his legs are positioned in a way that would suggest a closed one, meaning his shoulders and hips are grossly out of alignment with each other, creating a rather unstable body posture.
But hey, he might've needed to shoot in a hurry while moving, so let's forgive the weird stance. He has another, more serious issue to work on that I'll get to later.

If you want to learn more about different stances and their effect on the shooting, here's an excellent article on the topic by my friend and top archer John Dudley. "Kick it" by John Dudley

Let's move up, to the torso of the archer.

This is Brady Ellison again. Note the resemblance to Oliver Queen.
Note how the upper body forms a T-shape, slightly bent upwards at the waist. You'll also notice the arrow (and the stabilizer) face upwards a bit too, to make sure the arrow reaches the target, which is 70m ahead of him. If he was shooting a weaker bow, he would have to aim even higher (remember what I said about sights?).

The "T" created by the torso, both shoulders, and bow arm creates a powerful, and most importantly, repeatable basis for the shot. If he raised only the bow arm to get the sight high enough, it would slightly change the distance between the bow and the spot where his drawing hand touches his face. In turn, that would shorten the power stroke of the bow, and the arrow would not hit the same part of the target - it would be a very inconsistent form. That's why skillful archers will always bend at the waist.

You can easily observe this bending from the waist in Field Archery, a form of competition where archers aim at targets higher or lower from themselves.

Observe also how the front shoulder is below the arrow. Beginners and archers drawing too much weight often have a problem of their shoulder naturally rising up and inwards, losing to the power of the bow. If the shoulder is positioned as shown above, the bone structure of the body offers optimal support for the bow weight. Remember, this guy is pulling about 50lbs right now.

The drawing hand's elbow is slightly higher than the line of the arrow, and almost exactly behind it:

See how compact his form is? The more compact, the more aligned it is with the arrow and the target, making it more precise.
Even halfway through the draw, the elbow is only slightly out of line from the arrow:

The wrist of his hand is in line with the lower arm, and relaxed, as he is not using the lower arm or wrist to pull back the bow. The main muscles he is using at this late stage are the back muscles (rhomboids, rotator cuffs), traoecius, and the lower back side of his upper arm (connecting to the shoulder). He's basically rotating his elbow around to the back of the arrow line.

The character in the comic book cover at the top of this post has his drawing elbow out from his shoulder at almost 90 degrees from his torso, and would be using mostly his biceps to draw the bow(?). In addition, his bow arm is also far far out of alignment from the shoulder, which is extremely hard to maintain, as the bow would be working against his body, trying to pull the arm in towards the other. It's not impossible, but extremely inefficient and strange.

The only way I can think of to justify this kind of posture, is if he was planning to pull back the rest of the bow by twisting his torso out of the picture, aligning his shoulders with the legs. I don't know anyone who shoots that way, but it's probably possible, and if the artist intended to imply this sort of shooting technique, they're pretty clever.
Also, the arrow is on the wrong side of the bow, traditionally it would be resting on the back of his hand, not on the thumb. (resting the arrow on the thumb is how you shoot traditional Japanese bows btw) On any modern bow (and a lot of wooden long bows),

Speaking of thumbs, note how Brady is not gripping the bow fervently, like Green Arrow is on the cover. His hand is very loosely closed around the bow grip, which is resting securely against the base of his thumb. This is because if you grip the bow too hard, you will effect unnecessary torque on the bow, and it might negatively affect the shot.
In the Green Arrow picture, the bottom knuckles of the fingers visible at the front of the bow, meaning the grip would face the same area on the thumb, which would be extremely hard to do and probably painful.

Compound archers often grip the bow more securely, but never to the extent where it's basically a clenched fist:

Note that both archers shown have their drawing hand resting against their jaw, this is something we call anchor. The anchor is a reference point that the archer decides to be able to pull to exactly the same distance and angle every single shot. If your anchor is inconsistent, your arrow will hit a different spot every time.

Archers not using a sight also use an anchor point, but it might be at a different spot, for example they might have their fingers touch the corner of the mouth:

The anchor position is highly dependent on shooting style, but you will notice there is always some kind of reference point to keep things consistent. Additionally, most archers have the string touch their face at the chin and tip of the nose, these are also additional reference points that allow for added precision.

Upon release, the power of arm that had been pulling back the bow is instantly set free, making it fall back behind the head and neck of the archer. The archer does not suddenly pull harder, it's just the sudden release of power that makes the hand fly back. Some archers will release to have their hand touch the shoulder, others will stop at the back of their ear.
The hand will be relaxed with the fingers more or less stretched out, as the only thing the archer really does at release is to take the tension out of his/her fingers.

Finally, the bow turning upside down is a very characteristic part of the recurve archer's follow-through, however this will not occur if the archer isn't using a stabilizer system.

To sum it up, the archer will always try to maintain a solid, straight posture, with
That's it for today...Might've been a lot at once, but now you know the basics of shooting form.
I'll try to come back for another post on the little things to note about bow accessories and geometry, but don't hold your breath...

Before we go, how about some good examples of archery in the media! 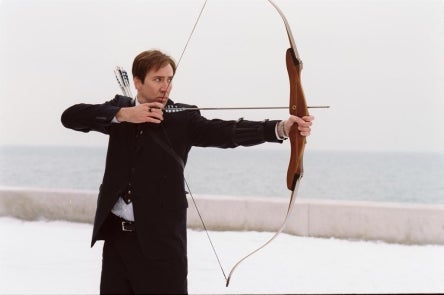 Nicolas Cage's performance in Weather Man is generally praised. The film depicts a man who takes up archery, and as you can see his form is pretty good for a beginner (low elbow, bit grippy on the bow, but hey...). Insiders say that Cage was very enthusiastic about his archery training, and probably still owns a bow. 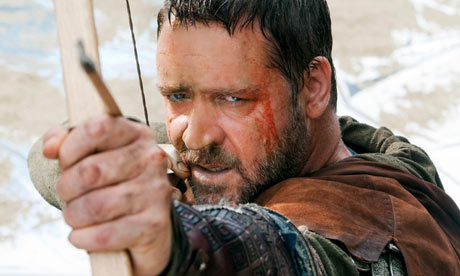 I personally enjoyed the Russel Crowe Robin Hood flick, and he did a pretty decent job with the longbow (look! arrow on the right side! and he's not turning the bow horizontal either) There wasn't that much archery in it, but it was way better executed than the Costner one.

On that topic, one scene that always stuck with me from the Costner film was when he shoots two arrows at the same time. Yes it is possible to nock and shoot more than one arrow at a time - but the result is quite unpredictable, and of course you would need a much wider arrow rest.

Note that this is for shits and giggles, and not applicable in a competition, hunting or combat situation! I also wouldn't call it accurate in any sense of the word.

Let me know in case you have any feedback, questions, or stuff that you would like me to touch on. Thanks for reading!
PS I do not own most of the pictures on here, so if they are yours and you don't want to have them on here, please notify me and I'll take them down right away.
Posted by Unknown at 2:41 AM

Email ThisBlogThis!Share to TwitterShare to FacebookShare to Pinterest
Labels: Archery