Archery is one of my favourite hobbies. I compete on a reasonable level. I work for an archery manufacturer. I also enjoy reading comic books, watching movies, and playing video games.
So you can probably imagine, bad or plain wrong depictions of archery in these media are a pet peeve of mine. (correct ones on the other hand are awesome!)
For a while now, I've been saying I should create a sort of "manual" for artists who are about to draw an archer, to make sure it doesn't look completely ridiculous, like this: 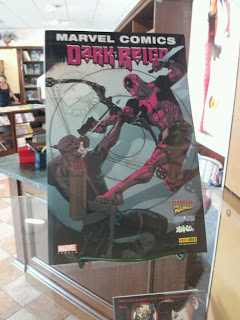 What's wrong with this picture? For anyone who has ever even tried out archery, it'll be painfully obvious, and very embarrassing to the artist and publisher. My peers were mocking this all over facebook.
You'll know exactly why after you're done reading this post.
I'll try to give you a primer on what archery equipment needs to look like to be credible.

Well, it is. But there's several types of bows.

Looks like a bow, right? This is the shape most commonly associated with the word "bow".
It's carved out of a piece of pliable wood, or, more commonly in modern times, laminated from several (notice how you can make out several layers in the bow, like layers of sediment).
This is called a traditional bow, one-piece bow, or longbow. There are myriads of different shapes, lengths, etc all over the world, but they all are one piece, with a string attached to both ends.
This type of bow is commonly used for recreation, and there are competitions held allowing this type of bow, which is especially popular in Europe.
You will not see this bow in the Olympic games, however, and it is no longer commonly used for hunting either.

Fancy, right?
This is a modern competition Recurve bow. Note how the ends curve back from the overall shape - thus the name recurve.
These bows disassemble into three pieces: one handle, or riser, and two limbs.
The riser is a piece of machined or forged Aluminum, or in some cases plastic or CFRP (Carbon Fiber Reinforced Plastic)
The limbs are the white things with the logo decals on them, and they serve the same purpose as the pliable wood on the bow above - they flex and store more power for every inch you draw back the bow string.

The limbs are what gives the bow its power, not the string.
I cannot emphasize this enough. The string is not elastic, the limbs are.
A fully drawn recurve bow will have a stronger concave shape than one at rest, depending, of course, on the length of the bow and the archer's drawlength.
Competition recurve bows generally have a draw weight of 35-50lbs, depending on the archer's physical ability and style of shooting.

A recurve bow will, in a competition situation, be outfitted with an assortment of accessories: 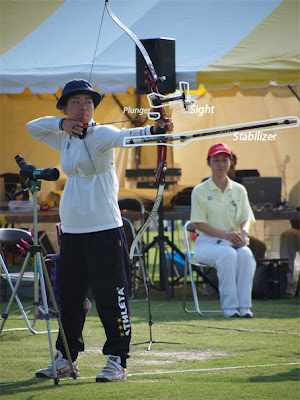 A Sight is what you use to aim. It has a vertical rail so you can move it up and down for different distances (the arrow will only fly a certain distance, so if you want to aim farther away, you need to raise the bow higher), and a reticle, or aperture, that you overlay with the target.
For Recurve archery, it's a relatively simple construction, made out of aluminum with some plastic or carbon parts.

A Plunger (Plunger Button, Berger Button) is a cushion that is pressed against the arrow shaft, and compensates for arrow flex upon release. It has to be adjusted for the individual archer's arrow stiffness to guarantee the right level of compensation.

A Stabilizer is, in most cases, a carbon tube with weights at the ends. The archer in this picture is using one long center stabilizer extending towards the target, and two side rods extending back towards the archer diagonally away from the bow in a V-shape (all together this makes for a three-tipped star, like a Star Wars A-Wing plane.). This configuration is most common among competition archers. (Common lengths are 26-30" for the center and 9-12" for the side rods)
Stabilizers offer, well, stabilization, they keep the bow still while aiming, and, to an extent even during the instant the arrow is shot. Think of a circus athlete using a pole to balance themselves while walking atop a wire.

Recurve bows can also be used as a bare bow, which is a separate category in some competitions, and looks like this:

Note that the archer is aiming along the arrow, and will be adjusting for target distance with the position of his drawing hand.

Recurve bows are also used for hunting, in which case they will have little to no stabilization and a rudimentary sight, or none at all.
However, this bow type is uncommon in hunting situations due to the high draw weight and low accuracy, which leads us to...

Compound bows are highly complex, intricate constructions - and the easiest to misunderstand. Note that this is the type of bow the artist tried to render in the picture at the top of this post.

They are also used in competition (albeit not the olympics, sadly), but their raison d'etre is hunting.
Bow hunting is quite popular in North America, so many of you might have seen a bow like this on TV.

Like the Recurve, a Compound bow also has a riser and limbs, but in addition, it also features a set of wheels or pulleys at the top and bottom. These are called cams (sometimes jokingly referred to as "training wheels"). They are connected by the string, which connects to the arrow like the one on a recurve, and 1-2 cables, which control the cam rotation.

Cams on modern-day compound bows are eccentric, meaning the pivot point is not in the center of the cam. If you've listened in high school physics class, you can probably imagine that this means they offer more resistance, and store more energy, at different parts of the draw cycle.

For example, let's say the above bow has a draw weight of 60lbs - not uncommon for a reasonably fit bowhunter or competition archer. At the end of the draw cycle, the draw weight will drop down by 60-70% to offer a comfortable position for aiming. At the same time, the bow will also increase power after you let go of the arrow, accelerating the it to 300 feet per second or more, far above what a recurve bow would allow an archer of the same ability.

Since the arrow is faster, it travels in a flatter curve, and is less prone to influences from wind and weather, making it more accurate.
In addition, compound archers also use different accessories to help their accuracy: 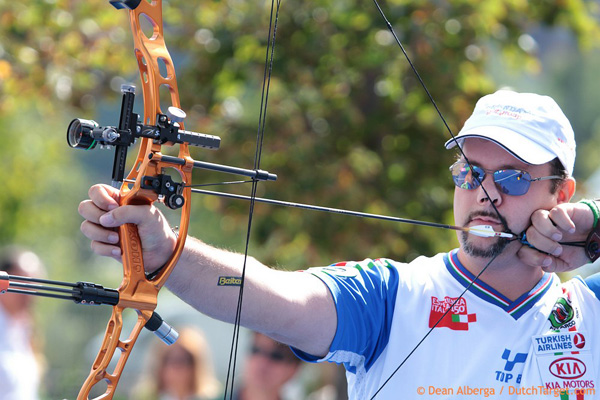 In a cometition situation, an archer will use a sight with a scope, which contains a lens with magnification. The archer is looking through a peep sight, which sits inside the string and allows the archer to look through it at the sight and the target - his eye is perfectly aligned with the sight, which again means added accuracy. (a recurve archer aims around the string, trying to keep it aligned at a reference point on the bow)

Also, the archer is using a release aid, a little hook with a mechanical trigger to open it, so his hands aren't actually touching the string. Again, accuracy boost.

On both recurve and compound bows, the arrow is not resting on the actual bow, but on a mechanical arrow rest, which can be adjusted to give maximum clearance and guarantee straight arrow flight.

Compare this picture to the one at the top, keeping in mind what I said about the string and cables.
Even though the compound bow has three strings on it that look the same, and are in fact made out of the same material, you do not pull all of these at once. Having the cables on there enables the cams to work as pulleys, lower holding weight, and speed up arrow flight, but they do not make contact with the arrow.

Not only is pulling all three of these back with your hands nearly impossible with normal human strength, but it also offers no merit at all - as I mentioned, it's the limbs powering the bow, not the string, and If you were to use it like that, the strings would all tug the arrow in a slightly different direction, messing up your flight path.

In a hunting situation, the configuration would look like this:

This bowhunter has a quiver mounted to the bow (competition archers will have it on a belt around the waist, a traditional archer may have it on the back), and uses a hunting sight.
A hunting sight has no lens in it, but it has several adjustable pins, which the archer sets to enable them to aim at several distances at once - for example the top pin might be 10yds, while the bottom one will be 40.

In a situation requiring speed, like the comic book cover back at the top, the archer might not want to bother with a release (which takes time to hook onto the string), so they would use a shooting glove or a tab, like a recurve bow.
The archer on that comic book cover seems to be pulling either with a release aid at his wrist (no idea how he would trigger that), or by tugging at the arrow, both of which are highly unpractical.

Before we go, here's some more examples of doing it wrong: This looks more like a crossbow than a bow, honestly I can't figure out how you would use it.
The blades(?) that are on there in place of the limbs look rigid, meaning the thing wouldn't move an inch.
This bow was obviously designed upon the assumption that the strings (again, why so many?) are elastic. In that case, they would have to be some new, super tough and elastic material (hey, it's a fantasy world, right?).
That or the limbs pivot at the root, with some kind of elaborate mechanism powering them from within.
Either way, traditional limbs would be much more practical.

Ok, this is probably a problem with the 3D rigging of the character, but the arrow isn't attached to the string... Also, there seems to be some kind of shielding right where the arrow rest should be, which would trap the arrow and break it, leading to serious injury. Always clear your arrow flight path..

That's it for today, I will try to make time again and come back for a second post about technique - what the archer shooting the bow needs to look like to be credible.
Let me know in case you have any feedback, questions, or stuff that you would like me to touch on. Thanks for reading!
PS I do not own most of the pictures on here, so if they are yours and you don't want to have them on here, please notify me and I'll take them down right away.
Posted by Unknown at 1:00 AM

Email ThisBlogThis!Share to TwitterShare to FacebookShare to Pinterest
Labels: Archery